your shopping carts is empty

Start Shopping
Product is not available in this quantity.

READ FAQS SEND US AN EMAIL

The Most Expensive Designer Heels in the World

Most fashionistas have experienced a certain moment. We’re talking about the one where you look at the price tag on a pair of pumps and get a bit wide-eyed, because these have to be the most expensive heels ever, right? Similar reactions may have occurred when looking at a set of Met Gala heels or fashion show stilettos, as what’s custom-made for Rihanna isn’t always in our budget. But what if we told you that these A-list favorites were chump change compared to a select few sets of stilettos, pumps, and wedges? The most expensive designer heels in the world often cost more than a house or luxury car, and we can’t stop staring at them.

VICE VERSA aims to make our foldable heels ultra-exquisite and accessible for all. Of course, we still have an appreciation for the intricate details and incredible backgrounds of the most expensive designer heels in the world. Some are embedded with diamonds beyond your wildest dreams, while others have earned a place in Hollywood history and let you walk in the shoes of a movie star. Literally. If you’ve ever pondered the most expensive heels across the globe, from pumps and stilettos to beautiful block wedges, check out the following list….

The most expensive heels in the world are equal parts David Bowie and Dubai dream, and we’re here for it. They were debuted in 2019 by Italian designer Antonio Vietri, and we immediately needed clarity on the $20 million value that matches the average price of a Los Angeles mansion. As it turns out, the addition of 30 carats of diamonds, a solid gold heel, and an actual meteorite piece can drive a pretty solid deal for the most expensive designer heels. The meteorite dates back to 1576 Argentina, putting a historical modification on this ultra-modern set.

These mega-expensive high heels from Antonio Vietro are reminiscent of several things. The futuristic design that includes a purple-silver hue, pure gold heel, and circular rings is reminiscent of David Bowie’s Space Oddity era from the late 1960s. And it only gets more metagalactic with the help of a meteorite. However, the true inspiration for this shoe is the Burj Khalifa, the Dubai building that holds the record for being the tallest building in the world. The Moon Star Shoes turned heads when it debuted at “Made in Italy, Designed in Emirates (MIDE) Fashion Week” a few years back, and it’s not just because of the $20 million. Our tip to you? Our Shimmer Heels have the same mystical vibes and Fashion Week-worthy fit as the most expensive heels in the world, at a way lower cost - and have the added benefit of folding from heels to flats in seconds!

Meet the second-place winner for the most expensive designer heels in the world. They’re embellished with a golden and glamorous design that’s reminiscent of the sky-high buildings and decadent jewelry in Dubai! This city is known for its luxurious lifestyles - abundant in underwater restaurants, modern and magnificent hotels, and mega-mansions with amenities that put the Hollywood Hills homes to shame. Therefore, it’s no surprise that Jada Dubai And Passion Jewelers Custom Passion Diamond Heels has created such a pricey and practically-perfect shoe. This brand is targeted towards the richest individuals in the world, with the typical pair of expensive heels from Jada Dubai running around $25,000. For context, this is nearly 20 times pricier than the average women’s designer heels from brands like Gucci and Jimmy Choo.

$25,000 is crazy enough, but $17 million for the Custom Passion Diamond Heels? It makes sense when you get into the design details of these elaborate and expensive designer heels. Designed over the course of nine months, these shoes are made with leather painted in pure gold, silk, and the rarest diamonds. 236 diamonds, to be precise. One of them is a 15-karat stunner that’s placed at the center of this luxury shoe. That’s more than the average celebrity engagement ring, and the Custom Passion Diamond Heels have one on each heel. Just wow. Your Dubai dreams become a reality with these exquisite accessories, which have rightfully earned their place as some of the most expensive heels in the world.

Debbie Wingham is a big deal in the world of high fashion, designing $74 million wedding cakes (yes, really) and killer couture with a long list of wealthy clients on the waiting list. Both of her worlds collided with these shoes, one of the most expensive designer heels in the world with a vibe that’s Candyland mixed with couture. Maybe it’s the white lining along the edges that adds flair to the chocolate brown body, which reminds us of the frosting on our favorite gingerbread houses we made as kids. But these sweet stilettos are far from childlike. They were created by Wingham as a request from a wealthy client who hoped to gift them to their daughter, meaning that they were made with both luxury and love.

Over 1,000 diamonds are present on these stilettos, placed along a 24 carat gold wire and each one rarer than the next. We’re talking about two 3 carat pink diamonds valued at $4 million each, and two $2 million carat blue diamonds… completing this delicious and dreamy creation that you can’t decide if you should wear or eat. As a coal miner’s daughter, Wingham can’t get enough diamonds in her creations, and she makes it clear with some of the most expensive high heels on the planet.

Stuart Weitzman is the ultimate shoemaker to the stars, having created red-carpet footwear since the 1980s. He’s designed the best expensive high heels for A-listers like Beyonce, Taylor Swift, and nearly every supermodel you can imagine. Of course, this specific pair of shoes is dedicated to a pin-up girl and iconic actress from another generation: “The Love Goddess” Rita Hayworth. She was a top movie star of the 1940s, appearing in dozens of films and becoming a glamour girl of the Golden Age of Hollywood. Weitzman sadly never had the chance to design a shoe specifically for Hayworth, as she passed away in 1987 one year after he began his business. However, he created one of the most elaborate and expensive designer heels in her honor.

These slippers are nothing short of classic and captivating, taking on a rustic burnt sienna hue that certainly belonged on Hollywood red carpets in the 1940s. Of course, it’s the diamond, ruby, and sapphire earrings that sit at the center of these shoes that truly take the stage. This jewelry was once owned by Hayworth herself and worn to dozens of A-list events, making these shoes a significant piece of Hollywood history. The $3 million shoes were designed for actress-singer Kathleen York’s 2006 Oscars outfit and are now owned by Hayworth’s daughter Princess Yasmin Aga Khan.

What would Dorothy be wearing if she lived in the big city rather than a small town in Kansas? More than likely, these remarkable ruby stilettos from Stuart Weitzman. It’s a sexier take on a cinema classic, keeping the same deep red hue while showing more skin and swapping sequins for all the rubies. Seriously, we’re talking about 642 of them embedded into the straps that total over 120 carats. It’s definitely a risky move to recreate one of the most famous pairs of shoes in the world, which became legendary when they appeared in 1939’s The Wizard of Oz, but what can’t Stuart Weitzman do?

The shoes were made in a dainty women’s size four, and feature a heel that’s roughly 4.5 inches high. They were sold at Harrod’s in London in 2003 to a mystery client. Fun fact: the ruby stilettos were placed in bulletproof glass as they awaited their new owner - as nobody can risk doing harm to Oz’s sexiest shoe.

Calling all sapphire enthusiasts, you’re going to be obsessed with this $2 million set of heels designed by Stuart Weitzman and jewelry expert Eddie Le Vian. The body and heel are sterling silver for understated elegance, while the toe strap contains 28 carats of diamonds. But that’s not even the best part. You won’t be able to take your eyes off the 185 carats of blue-purple tanzanites that sit along the ankle strap, imported from Africa and known as one of the rarest and most radiant stones in the world. It’s the ultimate collaboration between accessories, putting jewelry on the feet for a flawless look.

Of course, the question remains… do people actually wear the most expensive designer heels they buy? Many of Stuart Weitzman’s stilettos are kept away in a secret collection or displayed to the public on rare occasions. For instance, the Tanzanite Heels were put up for the public to see for the very first time in 2007 at New York Public Library.

You may notice that a good portion of the most expensive designer heels in the world was launched by Stuart Weitzman. Only such an accomplished designer could get away with recreating the most famous women’s heels in the history of folklore! Yes, we’re talking about a $1 million pair of Cinderella slippers. The glass slipper is arguably the biggest factor in the rags-to-riches fairytale, and anybody would feel like a princess in these reimagined and radiant shoes. Worn by Alison Krause at the 2004 Academy Awards, these heels contain 565 diamonds that come out to 55 carats.

This fairytale-worthy accessory is one of the most simple on our list of expensive high heels. Similar to the Cinderella films you may have seen, these glass slippers are a platinum silver hue with a transparent heel and straps. The see-through aspect puts the diamonds front and center, producing a princess-esque effect that makes you look like a million bucks. Literally.

Listen, diamonds are a girl’s best friend, and you’re wearing them head-to-toe (literally) with the most expensive designer heels in the world. Some of these beauties live in a billionaire’s closet for viewing purposes only, while pairs like the Rita Hayworth heels have sentimental value that’s purely priceless - and we’re not even talking about the diamond earrings in the center. While most of us will never own a pair of $2 million shoes, you can get a gorgeous knockoff in the form of VICE VERSA foldable heels!

The Everyday Heel in scarlet red is reminiscent of Stuart Weitzman’s tribute to Rita Hayworth, with all the old Hollywood glamour that’s much easier on your wallet. You can also try our Disco Slingback set, a classic black with a centralized rose gold brooch for all the sparkles. These shoes may not have hundreds of carats of diamonds like the most expensive heels in the world, but they have something even more priceless: comfort! Simply press a button and fold your heels into flats to maintain your sparkle while giving your soles a much-needed rest. VICE VERSA has your back… and your feet! 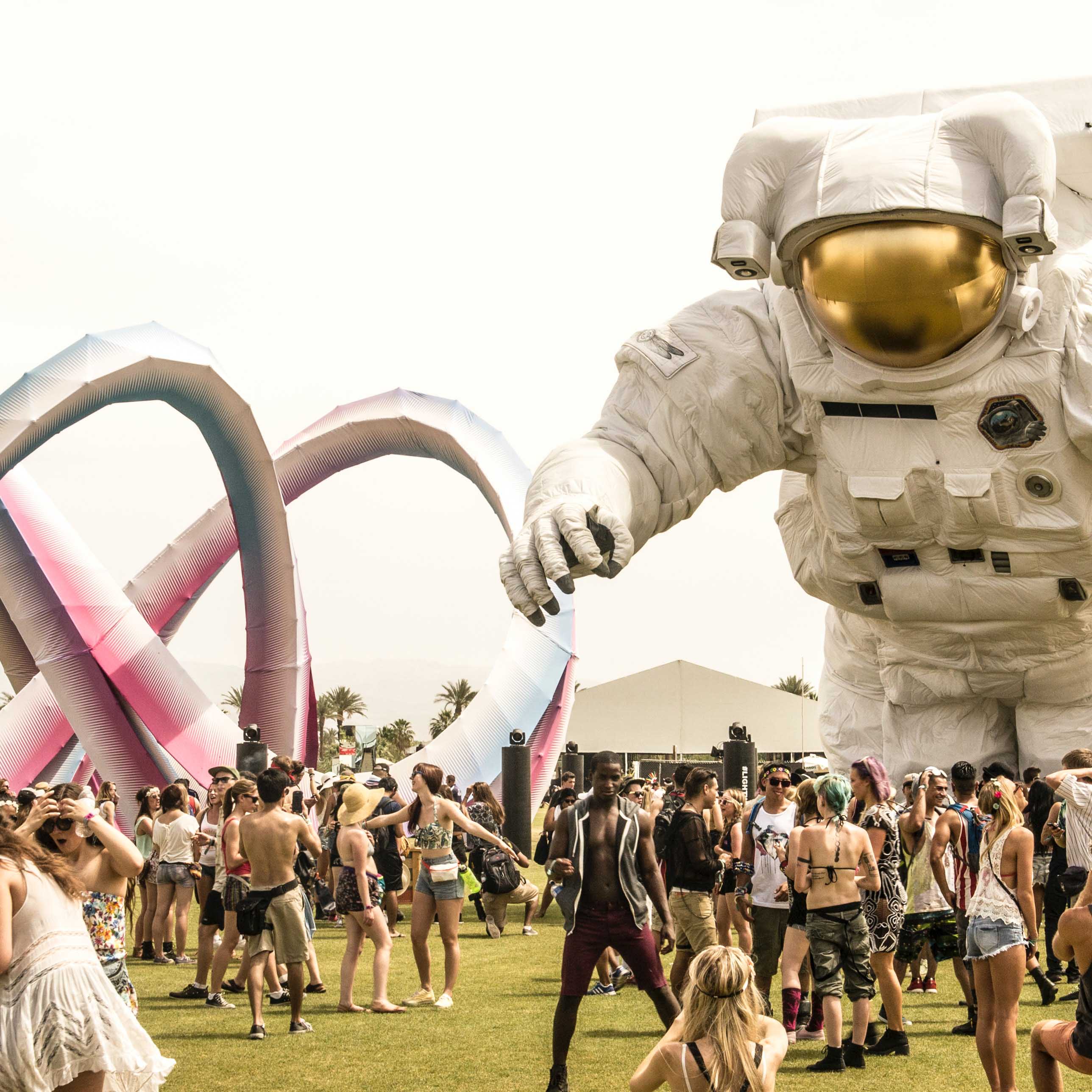 Why You Need Convertible Heels for Festival Season 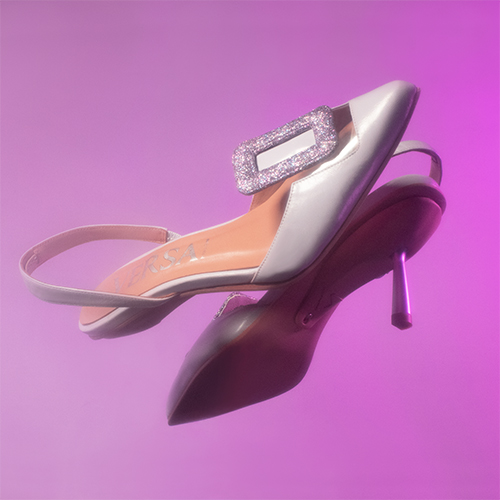 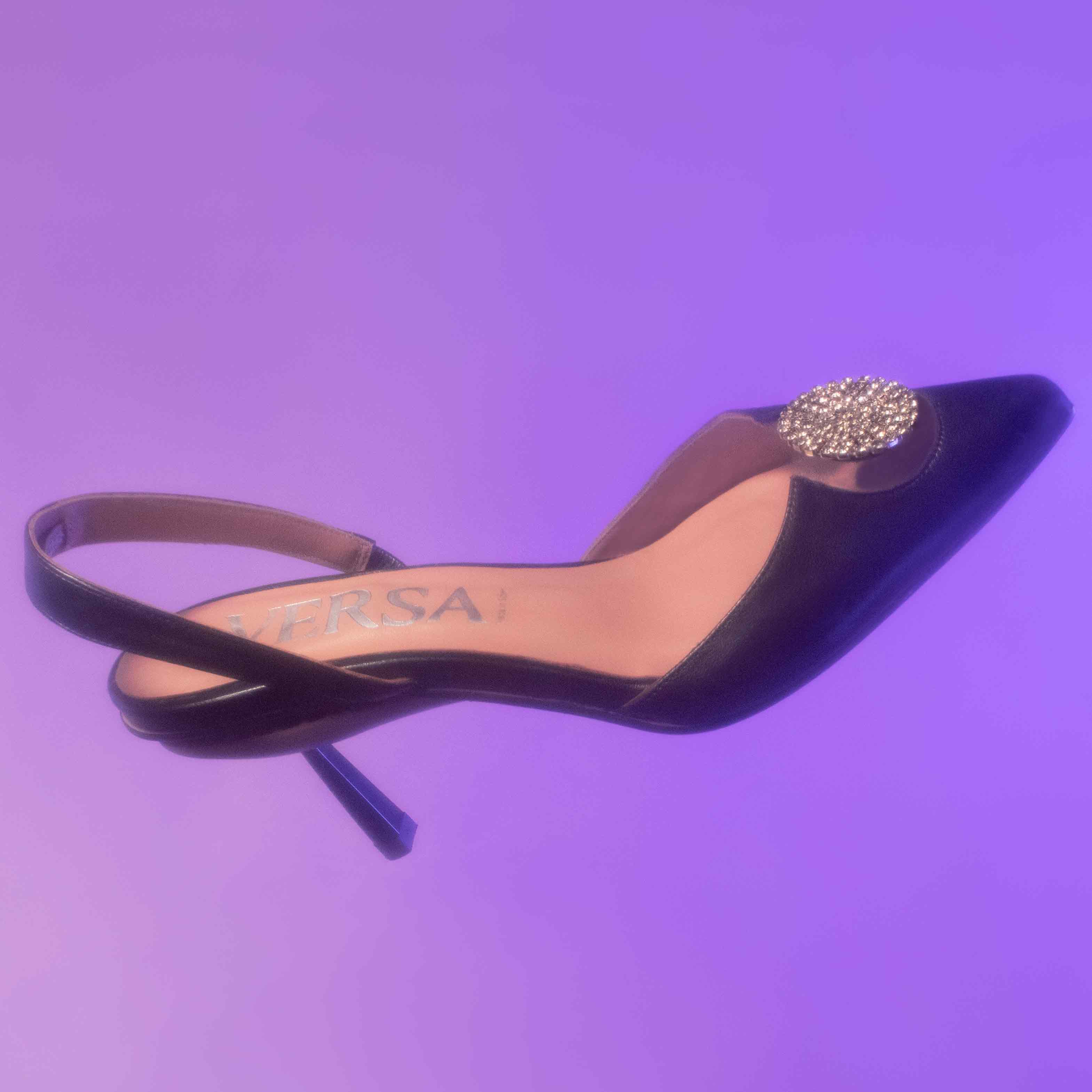 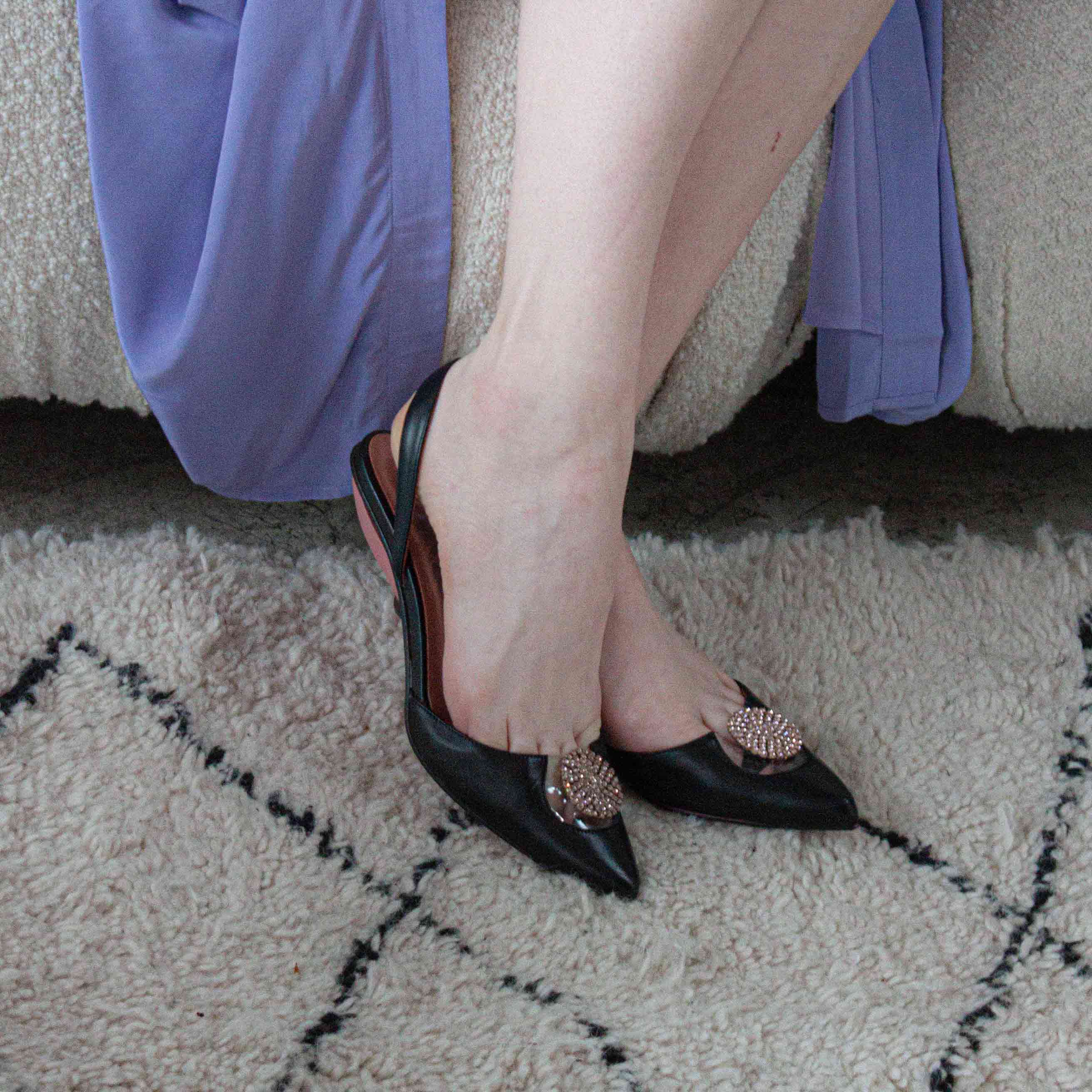 The Most Comfortable Heels for Work that Elevate Comfort & Style